On Monday, the Administration submitted to Congress a $4 trillion budget proposal for FY2016 that includes $15.84 billion for the FAA. In context with the President’s other discretionary spending proposals, the increases in funding for FAA operations, modernization and research will be difficult to sustain through the budget process unless Congress and the President reach a new agreement on overall discretionary spending levels.

*Proposal assumes increase in the Passenger Facility Charge (PFC) from $4.50 to $8.00 and focusing remaining funds on smaller commercial and GA airports.

While the additional proposed spending for FY2016 in F&E and RE&D are welcome, it does not appear those increases will be sustained in the long-term. The Administration’s out-year projections of FAA funding average approximately 2% growth through 2025 (see charts below). AIP would be sustained at the $2.9b level until FY2020 when it is projected to rise to $3.35b per year through FY2025. The proposed 10% increase in F&E funding for FY2016 actually increases out-year funding for modernization by $200m annually above the levels the agency reported to Congress just last summer in its capital development proposal. 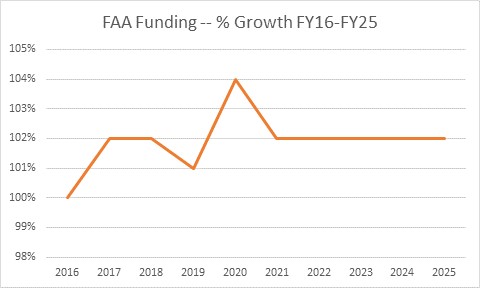 So now we know. Last week in our scene setter we discussed the FAA budget proposal for FY2016 in context of its place within overall discretionary spending. We noted that discretionary spending is an increasingly smaller part of the federal budget and capped in statute by the Budget Control Act to allow for a less than one percent increase in spending next year. We also noted that in response to this situation the President has three choices:

The President’s budget proposal essentially uses elements of choices #2 &#3. His overall discretionary spending numbers are 7% above the caps and the overall proposed budget would still deficit spend by $474 billion.

The ball is now in Congress’ court. It can live within the discretionary caps, which limit overall funding increases to less than one percent, and develop appropriations bills that are essentially flat. This would be difficult for many agencies to absorb. For example, given increased annual costs in categories such as FAA operations, a flat budget will essentially represent a cut to other parts of the FAA budget.

However, the President’s offer of increased defense discretionary spending may be intriguing to many congressional Republicans and could serve as the basis for a compromise similar to the Ryan-Murray agreement in 2013 when the discretionary caps were adjusted using various budgetary slight-of-hands to offset the increased funding.